Not Quite Mount Scott

I had hoped I could summit Mount Scott (the highest peak in Crater Lake national park) on my way back from a Memorial Day road trip to eastern Washington. Mother Nature had other ideas, however, as the rainy season has apparently returned to the northwest.  It was quickly clear that I would not be summiting, but I did manage hike for some turns on the north aspect of the southeast ridge. It was a wet affair, but, as always, there's no such thing as a bad day on skis. 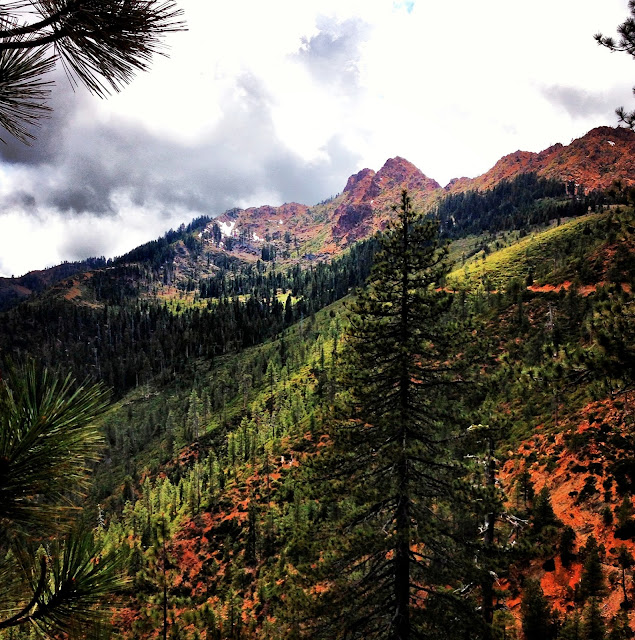 Not too far from my home in Medford, Oregon is the picturesque Applegate Valley. The Applegate has gained recent renown for its burgeoning wine industry, but the area offers some excellent hiking as well.  The pyramid-esque Red Butte sits about 11 miles past Applegate Lake on FS route 1055, just over the California border, and can be accessed via the PCT.  While only 6,739 feet above sea level, its rocky slopes and remote location give it the feel of more alpine terrain.
Click to read more »
Posted by Pete at 6:33 PM No comments:

At its genesis months ago, this weekend's trip was supposed to be to Crater Lake. Crater Lake averages 533 inches of snow per year, and, as one of the snowiest places in the lower 48, mid-May is typically a safe bet for a ski trip. However, this is no ordinary year. After an extraordinarily cold and wet December, 2013 has been one of the driest and warmest on record.  So warm and dry, in fact, that we became increasingly worried as the reports from park headquarters indicated a rapidly diminishing snowpack. As I told my ski buddies, I've never been this annoyed by so much great weather.

So last Thursday night, the day before the trip, everything was on the table. Mt. Scott from the east? McLoughlin? "Cascade Lakes highway opened yesterday..." someone chimed in. Even though the conversation happened via email, you could almost see the eyebrows raising. With the approach shortened by the early opening of the Cascade Lakes highway, 10,358-foot South Sister was it.

What a differences a month makes!  Summer arrived in Oregon ahead of schedule this year, and it's been in the 80s in the Rogue Valley for the last couple weeks. Knowing that the snow was rapidly disappearing in the Siskiyous, yesterday I rolled out of bed at 6 AM, grabbed the pup, and headed for the Siskiyou Crest for some late season turns on Dutchman Peak.